On day four of Crystal’s visit we headed to the city of Milledgeville about an hour from the park. Milledgeville is a busy college town and former capital of Georgia. Georgia is rather unique having five different cities as capitals over the years. The first capital was Savanna followed by Augusta and then Louisville. And then Milledgeville became the capital city in 1804 till 1868, when finally it was moved to Atlanta. Milledgeville is located just about dead center in the state of Georgia. It was planned that way when it was made into the capital city. At the time that it was established everything to the east was pretty well-settled, but to the West was open frontier. Today it is a city of about 18,000 population in the county seat of Baldwin County, Georgia. The city is bordered on the east by the Oconee River, which in the early 1800s was a major means of transportation another reason for locating the new capital here. We stopped by the visitor center as I knew they had a trolley ride that would give you tours of the city and share information. We arrived early and signed up to be on the 10 o’clock trolley. We had about a half hour before the trolley would leave so we headed outdoors to take in a few of the sites downtown. Right across the street from the visitor center is the old Baldwin County Courthouse, now belonging to the “Georgia College and State University”

Plus there are many other old and well-kept the buildings used by the college all through the downtown area. 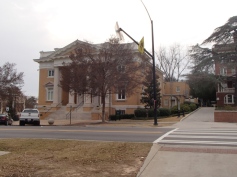 After a short walk around the block we headed back to waiter departure time. I really like the Christmas tree that was in the visitor center.

And especially this unique Santa ornament.

As fate would have it Crystal and I were the only two on the tour that day so we got personal service. Our tour guide Joe was a very informed local historian who volunteers his time giving tours several days a week. He was very enthusiastic and had an abundance of information. Sometimes a little too much throwing lots of dates and names at us and expecting me to remember them later in the tour. But it was enjoyable we got the see lots of places. I will highlight a few here as we drove around town. The first place we stopped was the old State Capitol, it served as the seat of government in Georgia from 1807 to 1861. 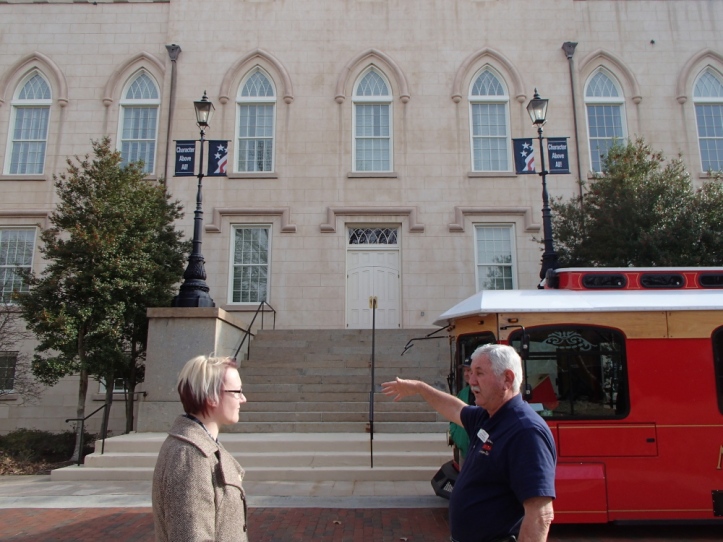 Joe had attended school here back in the 1960s. You see in 1879 Georgia Military College took over the old capital and made it into a school. Over the years they’ve had many different age groups attending this school. And all kinds of classrooms separate from the main building.

As you enter the main doors you’re welcome to this grand staircase.

And if you exit out the back of the building you can see many other buildings done in the same style that are part of the University today. 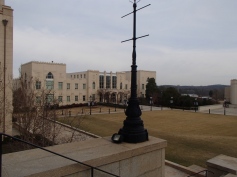 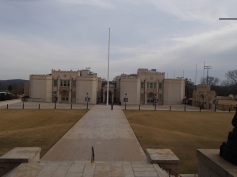 When you go up to the second story you enter the main meeting room where in 1861 Georgia seceded from the union.

It’s not a very big room and is used as a meeting room for the college these days but a lot of history was made here. 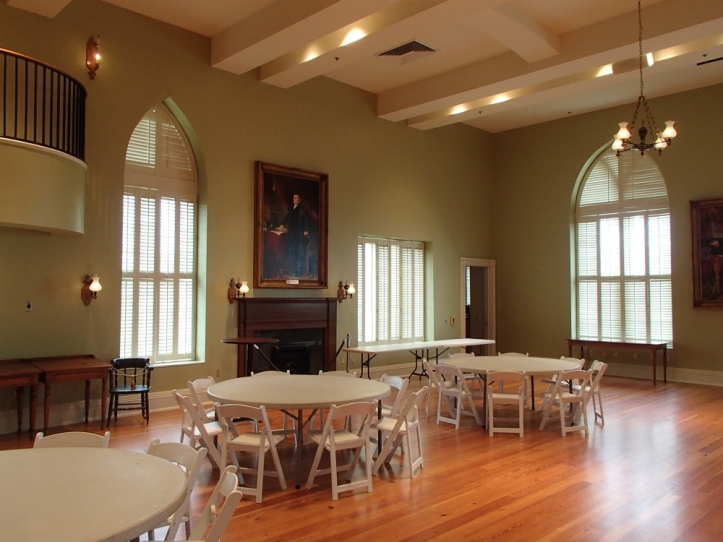 Here’s a portrait of James Oglethorpe the founding father of Savanna and Georgia.

From there we headed around the historical district as he pointed out more historical places. Here’s a photo of the outside of the old governor’s mansion. It was home of Governors of Georgia from 1839 to 1868. It’s open for tours but we didn’t have time to take this in today so I might come back another time.

Our next stop was St. Stephen’s Episcopal Church the oldest church in town dating back to 1841.

The present day Gothic style roof, replace the original flat roof destroyed by an explosion of a nearby arsenal during the Civil War. It’s a quaint little church with beautiful wood interior and lots of staying last Windows. 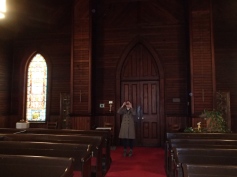 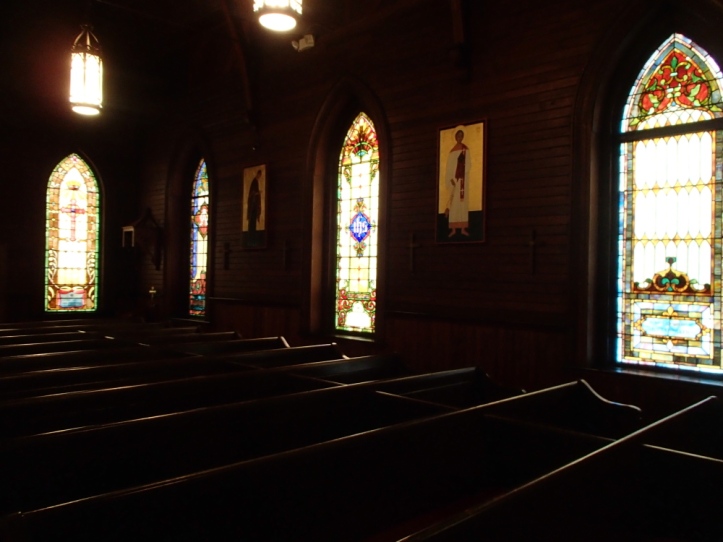 Our next stop was the “Brown-Stetson-Sanford House” built in 1825. Which is mainly open for tours by the trolley people and on special occasions such as fundraisers for the historical society. It’s full of very nice, items and Joe shared a lot of history on the house here’s a bunch of photos to give you an idea of this beautiful home. 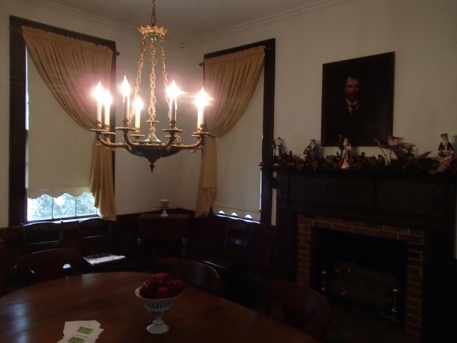 The house behind Crystal in this photo is just across the street from the Sanford House and is starting to show its age quite a lot. We asked Joe about it and he explained that it’s basically sitting vacant owned by someone from up north and is in bad need of some repairs, it’s a shame to see it going to waste the way it is.

And talking about going to waste also located in Milledgeville, is the historical “Central State Hospital”. This hospital was established in 1842 as the Georgia Lunatic Asylum. At one time this was the largest mental hospital in the world, covering over 1000 acres and over 100 buildings.

But today most of it lays vacant and in bad repair. Here’s a map of the location and as you can tell very little lead of that is being used only the colored in squares.

Most of the buildings are like these with broken windows and costly damages beyond repair. 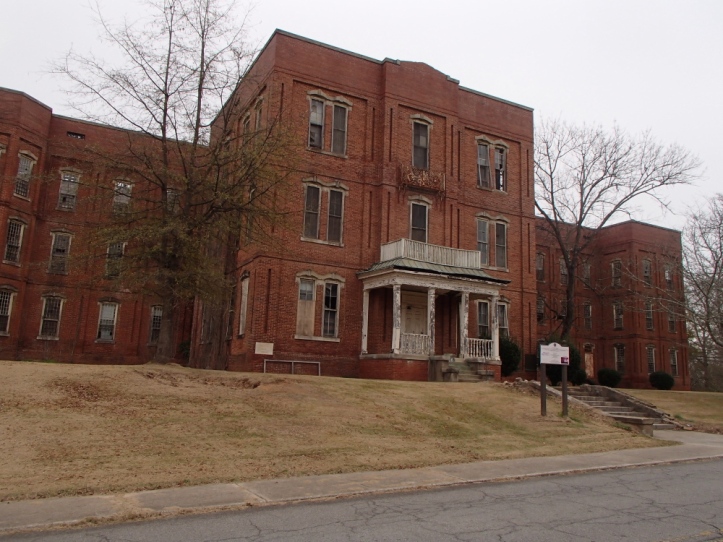 Much of the property at one time was part of the state prison system.

But as you can tell most of it is vacant and in bad repair.

But there is a section that is still used for the criminally insane but naturally is not very accessible to the public. After our tour of the historical district and a quick drive through of the mental hospital, Crystal wanted to go see the new Star Wars movie that just came out “The Last Jedi “so off we were to the local cinema to catch the 3 o’clock showing. It was quite good and very entertaining. After the movie we grabbed a quick bite at Capt. D’s and made our way back home. Another busy and fun filled day with only one more full day left to spend together. I’ll cover Saturday, our final full day together in my next post till then take care, Rick