Since my last post I’ve been busy finishing up projects at Hamburg State Park with the intentions of leaving on April 9. There were several little projects that I wanted to complete before my time was done here. It’s been a great winter here in Georgia, and I really made Hamburg home and take pride in all the things we’ve accomplished here at the park this winter. It was hard to leave because I made so many new friends and acquaintances here in Georgia. But it’s time to move on and slowly the work my way back to Wisconsin. With the time I’ve spent and the hours I accumulated in the Georgia state park system, I’ve earned several free nights of camping at Georgia State Parks. So before I head into Alabama I will be using up these days at a couple different state parks in Georgia. But before I left I had one more delightful treat, when my good friends and fellow RV’s Jim and Diana who I had worked with in Oregon at the lighthouse last summer. They went out of their way to come see me on Easter Sunday and spend the night camping at the park. Here’s a photo Jim was nice enough to take of the three of us.

They arrived early afternoon and it was a nice day, I took them around the park and showed them what we had to offer here at the park. And then we decided to take one of the paddleboats out on the lake.

Here’s a photo of what one of the paddleboats looks like. Jim and I did the paddling and Diana went along for the ride.

We spent a couple hours paddling around the lake and talking, sharing what we all did this winter. We paddled from the mill over to their campsite to get a couple photos of it from the water.

We got them in one of our prime sites right on the water.

We spent the evening visiting and catching up, and Jim even broke out his new telescope and set it up so I could get a glimpse at a few of the stars “it’s very cool”. You can read about his new toy on his blog by clicking on this link. On Monday morning we spent a little more time together and exchange hugs and goodbyes. They headed off toward Savanna to spend a few days exploring that area. You can read about some of their time on a couple other posts on their blog here and here. It was really great catching up with them again and were not sure when our paths will cross again because they’ll be spending their time in the East this summer and back up in Michigan this fall and I’ll be on the West Coast.

On Monday, April 9 I said my goodbyes to everyone at the park, it’s always a mixed bag of emotions when it comes time to leave after being in one spot and making at home for so many months. We’ve all really gotten close and had a great time this winter. But as I’ve stated before I got the itch to move on and do some more exploring. So I headed over to the Indian Springs State Park just a short 80 miles west. Indian Springs is thought to be the oldest state park in the United States. Its beginnings started back in 1825 when the mineral springs were open to the public and since that time there has always been public access, therefore it is considered the oldest state park in the nation. Even though Georgia didn’t start an official state park system until 1926. There are number of very cool stone structures that were built by the CCC back in the depression. In this photo the small house to the left is the Springhouse built over the natural artesian spring that still runs freely today. People come from all over to get water and use it for drinking as it is supposed to have very good healing characteristics.

If you read the information on this plaque that is on the spring building, it states that the Indians were coming here for many years before the white man ever occupied this land. They came to bathe then and drink the water as they also felt it had good healing powers.

This large building was also built by the CCC and is used today for weddings and other social gatherings. You can rent it from the state and hold your parties here.

As you can tell it’s very well-constructed and is going on 100 years old. 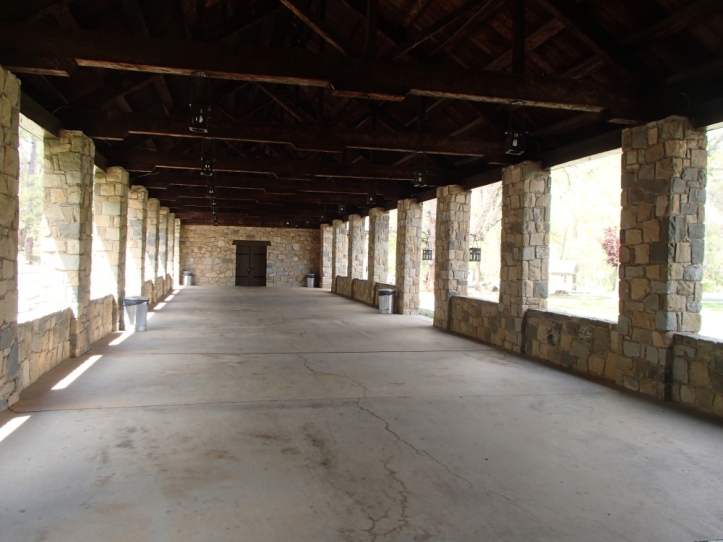 There were beautiful flowers in bloom on the side of this building and all around the park. 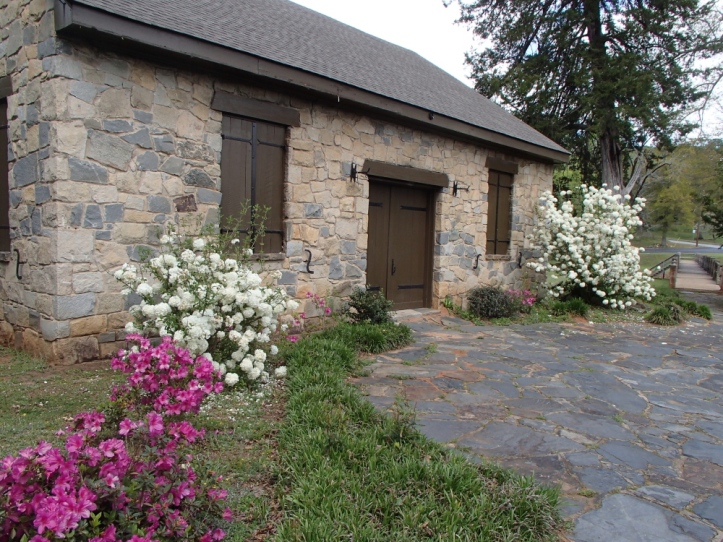 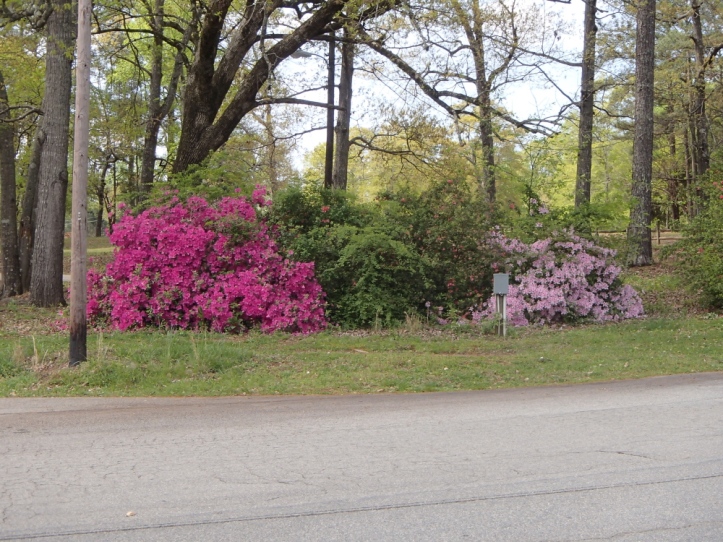 Here’s a couple photos of the beautiful rapids downstream of the dam.

And of course Maxine couldn’t wait to get in the water seeing it’s been months since she went swimming last. And she also expressed a little concerned that she is not been featured in any of my blog postings recently. So here she has bringing me her Frisbee insisting I throw it out in the water. 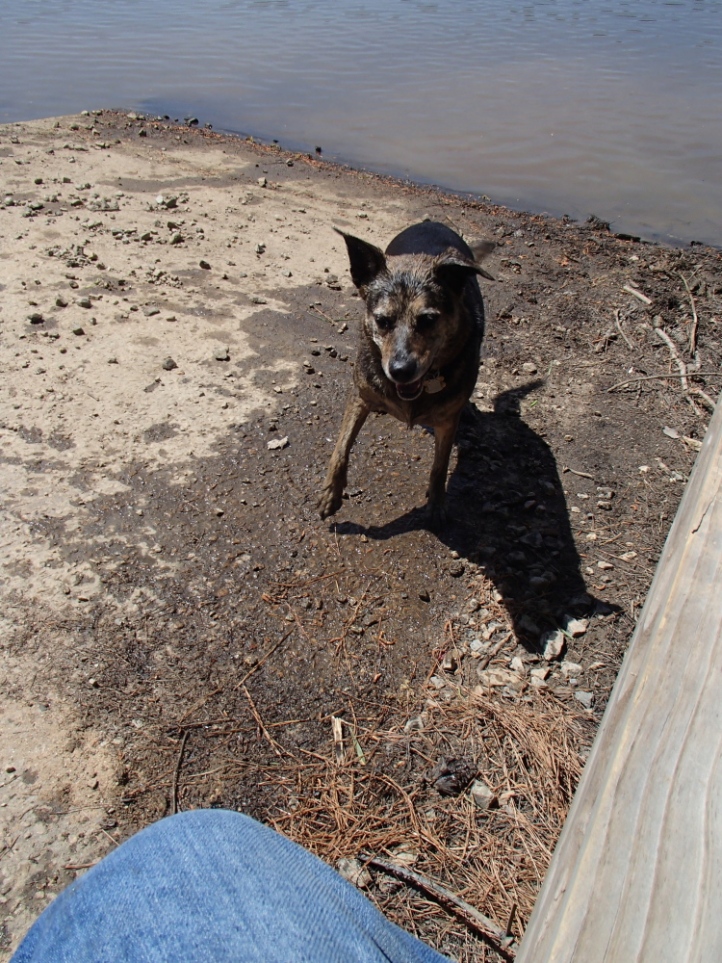 So we spent quite a little time down by the lake and she enjoyed the fresh cool water.

So on one of the days that I was here I went on a little side trip to High Falls State Park which is only a few miles away. There is a large dam that forms the 650 acre lake for lots of fun water activities. As you can see from these photos the dam is 606 feet long and 35 feet high. 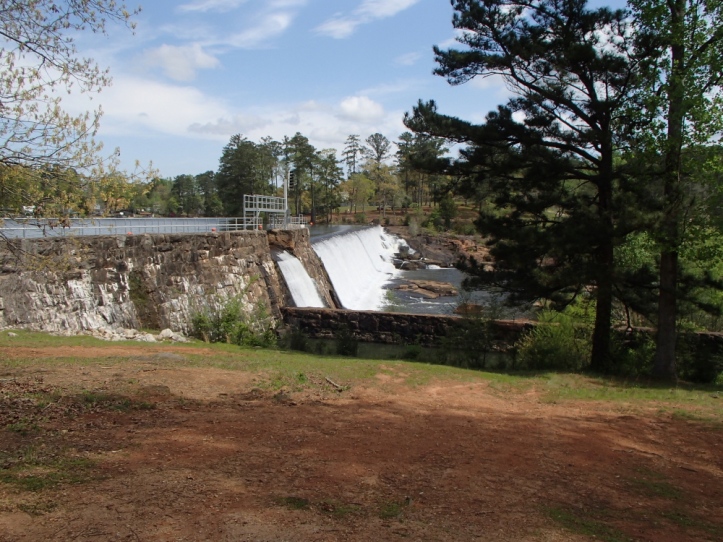 The park offers over 100 campsites, 17 of them up on the lake side, along with a half a dozen Yurt’s (tent like cabins). The rest some 89 sites down on the lower part of the river. It like most Georgia parks are nicely kept up and will accommodate fairly large RVs with sites capable of 50 foot vehicles. So if you’re in the area might want to check out either one of these two parks. From here on Thursday I will be heading further west to Franklin Roosevelt State Park another Georgia Park. I will share more information in my next post. That’s it for now, thanks for following along with this quick update best wishes and safe travels to all, Rick